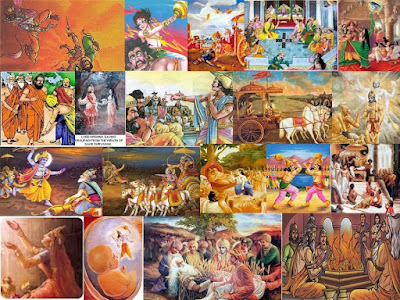 Saalvan was defeated during Rukmini kalyanam by yadava army. He prayed to Lord Parameswara and got Soubham, the aerial car as boon from him. When Krishna left to Indraprastha for the rajasuya yagna, Saalvan attacked Dwaraka. Pradyumna fought with him courageously and killed his minister Dhyuman. The battle went on for 27 days. Krishna came to Dwaraka with Balarama and destroyed Saalvan's army. Saalvan pushed Krishna's bow and arrow down and with his magic made a fake Vasudeva, Krishna's father and killed him, to confuse Krishna. Some say that even Krishna did not realise that it was an illusion for some time. But Sage Vyasa has denied that fact.

Krishna broke the aerial car with his mace and threw it in the ocean. Krishna killed Saalvan by chopping his head with the Sudarshan Chakra. Dantavakra opposed Krishna and continued to fight with him. Krishna took his Kowmodahi and killed Dantavakra. Since he was virtuous and devoted to Krishna in his previous birth, he merged with Lord just like Shishupala and attained Salvation, Bhattathiri wondered, if Krishna's avatar itself was only to give salvation to his devotees who had their minds fixed on the Lord in their previous births.

After Krishna returned to Dwaraka, Duryodana, who could not bear insult by Draupadi and Bhima, invited Pandavas for a game of dice at Hastinapur. Duryodhana tricked Yudhisthira in this game and with help of his maternal uncle Sakuni, he won the game. As a result, Yudhisthira lost wealth, his brothers, himself and finally Draupadi. Duchaadanan, brother of Duryodhana, brought Draupadi forcibly to the court holding her hair and stripped her for clothes from her hip. Helpless Draupadi cried and surrendered to Krishna for help and he granted her endless length of clothes and protected her modesty at the assembly of Kurus. Later during the pandavas stay in the forest, Sage Durvasa visited them after they had taken food. Dharmaputra did pooja for the rishi and requested him to have food at their place. Rishi also agreed and went to take bath at the river. Draupadi had a divine bowl given by Surya God which can give food only once. After consuming it that day and bowl washed, it did not have the power to give food again. Draupadi was helpless again and in the fear of Rishi's curse, she prayed to Krishna. Krishna went there and consumed the speck of greens sticking to the vessel and satiated the hunger of Durvasa rishi and other sages who accompanied him.

When the fight between Pandavas and Kauravas was planned, Arjuna requested Krishna's help on his side while Duryodhana requested only Krishna's army on his side. Krishna granted the army to Duryodhana and stood by Arjuna's side. Then Krishna went as a messenger to Hastinapur at the request of Pandavas to see if he can stop the fight from happening. Though Bhishma and Drona were happy with his coming, Duryodhana refused any peace talks. Krishna showed his Cosmic form to the assembly of sages and shook the entire Hastinapur and returned to Dwaraka.

In the battle field, Krishna played the role of Charioteer to Arjuna. Seeing his own relatives and acharyas on the opposite front at the battle field, the compassionate Arjuna was upset and had no will to kill them. Krishna looked at the sad and dejected warrior and questioned him why he was sad? He advised Arjuna that Aatma is eternal and one. There is an atma in every form of life which is pure and cannot be destroyed. Hence asked him to leave the fear of killing his relatives and asked him to surrender his mind to Krishna and do his rightful duty as Kshatriya. Krishna revealed his cosmic form to Arjuna which restored balance to his confused mind.

Bhishma, one of the prime devotees of Krishna, attacked and killed 10000 warriors everyday to aid Krishna's intention of reducing the evil in the world. Arjuna had become tired of resisting Bheeshma;'s arrows. Noticing this, Krishna who had vowed not to take weapons in the war, broke the vow and took the Sudarshan chakra and ran towards Bhishma as if he was angry. Bheeshma put his weapons down and put his head down and prayed to Krishna. This pleased Krishna and he returned back. When Arjuna was fighting with Drona, Narakasura's son Bhagadatta used Vaishnava Asthram to kill Arjuna. Krishna took the asthram on his chest thereby protecting Arjuna. Then he masked sunlight and made Arjuna kill Jayathrathan. Karna used his Nagastra to kill Arjuna. Krishna stepped his foot hard and made the chariot go few inches below the earth and let the arrow take Arjuna's crown but spare his life. Bhattathiri was surprised at the various feats of Krishna to protect Pandavas.

Before the start of the battle, Balaram went on pilgrimage to Naimisharanya. When Balaram reached Naimisharanya, Sutha Puranikar did not get up to respect him and hence Balaram killed him. He then made Sutha Puranikar's son assume his father's position there to continue conducting the discourses. Valkalan, an asura was destroying the yagnas conducted during various seasons. Balarama killed Balvalan and completed his pilgrimage and returned at the time when Duryodhana and Bhima were fighting with mace terrifically towards the end of the battle. After watching the prolonged fight, Balarama returned to Dwaraka.

Drona's son Ashwathama killed Draupadi's sons, the upa-pandavas while they were sleeping. Krishna advised Arjuna to retract the Brahmastra sent by Ashwathama in a bid to kill Arjuna. The Asthra discharged by Arjuna clipped of Ashwathama's crest Jewel. As per Krishna's advice, Arjuna took possession of the crest jewel. Later Ashwathama in a bid to remove future generations of Pandavas sent a Brahmastra in to Uttara's (Abhimanyu's wife) womb to kill the foetus. Uttara worshipped Krishna to protect her. Krishna took a miniscule form of the size of a thumb and entered her womb with sudarshan chakra and protected Uttara and the foetus.

Bhishma who was defeated in the war and the one who had the power of deciding the moment of his death, was lying in the bed of arrows. He advised all about Dharmas to Yudhisthira. Then by his will, keeping his vision fixed on Krishna, Bheeshma took his last breath and attained Salvation. Krishna enabled Yudhisthira to perform three yagnas to fulfill all his aspirations and returned to Dwaraka. Bhattathiri worshipped the Lord who did so much acts to protect Pandavas and uphold Dharma on Earth, and requested to protect him too from all his ailments.